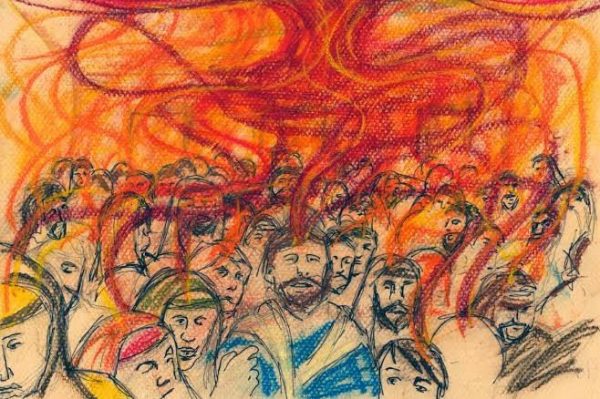 By Greg CummingNovember 14, 2018October 22nd, 2021No Comments
Watch This Message

When Jesus had finished His ministry empowered and anointed by the precious Holy Spirit who was His MANTLE, He was about to ascend into heaven – just like Elijah was about to ascend. And what did He tell His disciples (His own SONS OF THE PROPHETS)?

John 14:19 “A little while longer and THE WORLD WILL SEE ME NO MORE, but you will see Me. Because I live, you will live also.
26 But the Helper, THE HOLY SPIRIT, whom THE FATHER WILL SEND in My name, He will teach you all things, and bring to your remembrance all things that I said to you.

Acts 1:4 And being assembled together with them, He commanded them not to depart from Jerusalem, but to WAIT FOR THE PROMISE OF THE FATHER, “which,” He said, “YOU HAVE HEARD FROM ME;
5 for John truly baptised with water, but YOU SHALL BE BAPTISED WITH THE HOLY SPIRIT not many days from now.”
6 Therefore, when they had come together, they asked Him, saying, “Lord, will You at this time restore the kingdom to Israel?”
7 And He said to them, “It is not for you to know times or seasons which the Father has put in His own authority.
8 But YOU SHALL RECEIVE POWER WHEN THE HOLY SPIRIT HAS COME UPON YOU; and you shall be witnesses to Me in Jerusalem, and in all Judea and Samaria, and to the end of the earth.”

When Jesus was about to leave this earth, He expressly told the disciples that they must wait until they were endowed with the Holy Spirit before they became His witnesses.

Yes that’s right – the HOLY SPIRIT IS OUR MANTLE.
Have you been baptised with the Holy Spirit?