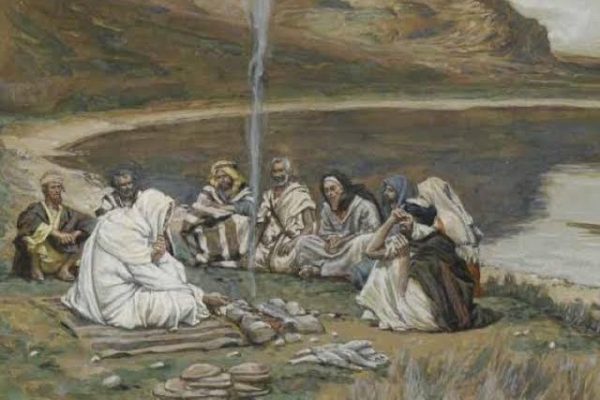 #75 – The Final Goodbyes of the Master Prophet

Before the old MASTER PROPHET Elijah left this world, the Lord sent him to BETHEL (most likely to tell his disciples, THE SONS OF THE PROPHETS at BETHEL, that he was going to be taken away. This was a personal “goodbye” from their Master.

2 Kings 2:1 And it came to pass, when the Lord was about to take up Elijah into heaven by a whirlwind, that Elijah went with Elisha FROM GILGAL.
2 Then Elijah said to Elisha, “Stay here, please, for THE LORD HAS SENT ME ON TO BETHEL.”
But Elisha said, “As the Lord lives, and as your soul lives, I will not leave you!” SO THEY WENT DOWN TO BETHEL.

I picture it like this.
The Lord decided that Elijah’s time on earth was complete and was about to take Elijah to heaven, and so He sent Elijah to the young men that he was overseeing in BETHEL to tell them and to say goodbye.
He and Elisha were in GILGAL at the time, down in the Jordan Valley near JERICHO and BETHEL is on top of the hill 25 kilometres away. This is about an 8 hour walk up hill.

Elijah tried to dissuade Elisha from coming because he knew that he would be coming back past Gilgal later, but Elisha would not be dissuaded.

This gnarly old prophet who knew the young men in BETHEL personally like a father, and a mentor, and a rabbi was wanting to give his personal farewell to them.
So together Elijah and Elisha walked up the mountain to BETHEL.

They probably arrived late in the afternoon and most likely stayed the night in BETHEL. Perhaps Elijah wanted to meet personally with the young men, so did so without Elisha.

So while Elisha slept, Elijah met with the men around a fire as he had done many times before. They sat around the fire, eating some bread together and looked at him as the flames danced off his wrinkled, sun hardened face.
“God has told me that I am going to be taken today. I wanted to come and say goodbye and to thank you for all your assistance to me and for being great students. Boaz you have real potential. David remember to pray a bit longer at night time. Mordecai try and smile more. As I have told you before, God has chosen my replacement – Elisha. Honour him as you have honoured me. Now tomorrow I must go and say my goodbyes down to the disciples in Jericho. So this is goodbye.”

There were mixed feelings and lots of questions and so there in Bethel around the fire, Elijah talked and there was a lot of last minute instruction until late into the evening after which he prayed for them and went to sleep.
The next morning, the young men were all understandably both upset and excited by the news of the departure of their MASTER PROPHET, and so they all hurried over to Elisha to tell him the news. Elisha was just waking up and gathering his things together so as to join Elijah on his trek back down the mountain.

2 Kings 2:3 Now THE SONS OF THE PROPHETS WHO WERE AT BETHEL came out to Elisha, and said to him, “Do you know that the Lord will take away YOUR MASTER FROM OVER YOU TODAY?”
And he said, “Yes, I know; keep silent!”

Elisha joined Elijah as he started his descent from BETHEL to JERICHO in order to say his farewells to the SONS OF THE PROPHETS in JERICHO. But again Elijah tried to dissuade Elisha from coming on this personal business.

2 Kings 2:4 Then Elijah said to him, “Elisha, stay here, please, for THE LORD HAS SENT ME TO JERICHO.”
But he said, “As the Lord lives, and as your soul lives, I will not leave you!” So they came to Jericho.

So down they walked, the same way they had walked up from BETHEL TO JERICHO – 25 kilometres away about 6-8 hours walk down hill.

Elijah said his goodbyes there in Jericho and the SONS OF THE PROPHETS were just as eager to tell Elisha.

2 Kings 2:5 Now THE SONS OF THE PROPHETS WHO WERE AT JERICHO came to Elisha and said to him, “Do you know that the Lord will take away your master from over you today?”
So he answered, “Yes, I know; keep silent!”

Then Elijah knew it was time to go. Where would his departure take place from earth to heaven?
We are not told the exact point of departure, but the scripture tells us that he had just walked from GILGAL to BETHEL and then from BETHEL to JERICHO.

When Elijah and Elisha came to the Jordan River and looked across towards the wilderness area, they were looking right at the spot where Moses and the children of Israel had gathered for Moses’ final speech and where Joshua had led them to cross the river to enter the promised land more than 500 years earlier.
After his address, Moses had then walked up Mount Nebo never to be seen again.

Understandably, the SONS OF THE PROPHETS were standing off in the distance watching them.

6 Then Elijah said to him, “Stay here, please, for the Lord has sent me on to the JORDAN.”
But he said, “As the Lord lives, and as your soul lives, I will not leave you!” So the two of them went on.
7 And FIFTY MEN OF THE SONS OF THE PROPHETS went and stood facing them at a distance, WHILE THE TWO OF THEM STOOD BY THE JORDAN.

And so now the MASTER PROPHET had said all his goodbyes to his disciples in GILGAL, BETHEL and JERICHO and all that was left was for the Lord to take him.

Is there a man or woman of God that has played a big part in your life?
Who are they? And why have they been such a significant influence in your life?
Why not take a moment to HONOUR THEM NOW and tell us all who they are and why you value them so much. This is your chance to bring them the great honour they deserve.