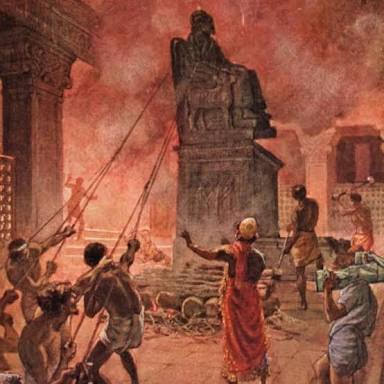 #68 – The Prophet, the Withered Hand and a Future King Named Josiah.

By Greg CummingOctober 7, 2018October 22nd, 2021No Comments
Watch This Message

We are still exploring the city of Bethel.
Jeroboam, the King of the northern tribes has set up a golden calf and called on the people to worship it. But the Lord sends a prophet to Bethel to address this issue. The Bible picks up the story with this man of God standing beside this false altar at the time when King Jeroboam was also standing beside the altar making an offering to the golden calf.

1 Kings 13:1 And behold, a man of God went from Judah to BETHEL by the word of the Lord, and JEROBOAM STOOD BY THE ALTAR TO BURN INCENSE.
2 Then he cried out against the altar by the word of the Lord, and said, “O altar, altar! Thus says the Lord: ‘Behold, a child, JOSIAH BY NAME, SHALL BE BORN TO THE HOUSE OF DAVID; and on you he shall sacrifice the priests of the high places who burn incense on you, and men’s bones shall be burned on you.’ ”
3 And he gave a sign the same day, saying, “This is the sign which the Lord has spoken: Surely the altar shall split apart, and the ashes on it shall be poured out.”
4 So it came to pass when King Jeroboam heard the saying of the man of God, who cried out AGAINST THE ALTAR AT BETHEL, that he stretched out his hand from the altar, saying, “Arrest him!” Then HIS HAND, which he stretched out toward him, WITHERED, so that he could not pull it back to himself.
5 The ALTAR WAS SPILIT APART, and the ashes poured out from the altar, according to the sign which the man of God had given by the word of the Lord.
6 Then the king answered and said to the man of God, “Please entreat the favour of the Lord your God, and pray for me, that my hand may be restored to me.”
So the man of God entreated the Lord, and the king’s hand was restored to him, and became as before.
7 Then the king said to the man of God, “Come home with me and refresh yourself, and I will give you a reward.”
8 But the man of God said to the king, “If you were to give me half your house, I would not go in with you; nor would I eat bread nor drink water in this place.
9 For so it was commanded me by the word of the Lord, saying, You shall not eat bread, nor drink water, nor return by the same way you came.’ ”
10 So he went another way and did not return by the way he came to BETHEL.

God in His love for His people and His covenant sent this prophet to the people of the northern tribes of Israel. This was a prophet indeed, sent to bring the word of the Lord against this despicable altar that had caused good people to turn away from Him and had brought considerable confusion and consequently a curse.
This man mentioned the coming of a King named Josiah from the house of David who would bring judgement on this apostasy.
OVER 300 YEARS LATER, Josiah, King of Judah showed up in BETHEL.

2 Kings 23:15 Moreover the altar that was at Bethel, and the high place which Jeroboam the son of Nebat, who made Israel sin, had made, both THAT ALTAR AND THE HIGH PLACE HE BROKE DOWN; AND HE BURNED THE HIGH PLACE AND CRUSHED IT TO POWDER, AND BURNED THE WOODEN IMAGE.
16 As Josiah turned, he saw the tombs that were there on the mountain. And he sent and TOOK THE BONES OUT OF THE TOMBS AND BURNED THEM ON THE ALTAR AND DEFILES IT ACCORDING TO THE WORD OF THE LORD WHICH THE MAN OF GOD PROCLAIMED, who proclaimed these words.
17 Then he said, “What gravestone is this that I see?”
So the men of the city told him, “It is the tomb of THE MAN OF GOD WHO CAME FROM JUDAH AND PROCLAIMED THESE THINGS WHICH YOU HAVE DONE AGAINST THE ALTAR IN BETHEL.”
18 And he said, “Let him alone; let no one move his bones.” So they let his bones alone, with the bones of the prophet who came from Samaria.
19 Now Josiah also TOOK AWAY ALL THE SHRINES OF THE HIGH PLACES that were in the cities of Samaria, which the kings of Israel had made to provoke the Lord to anger; and he did to them according to all the DEEDS HE HAD DONE IN BETHEL.
20 He EXECUTED ALL THE PRIESTS OF THE HIGH PLACES who were there, ON THE ALTARS, AND BURNED MEN’S BONES ON THEM; and he returned to Jerusalem.

You could say that Josiah did a thorough job. He was zealous for the Lord and His Covenant.
And this all happened in Bethel Exactly as God had forewarned.

Whilst murdering witchdoctors and leaders of apostate religions is not how the Lord operates in these days, (we fight not against flesh and blood), our words anointed by the power of the Holy Spirit certainly do have power.
If you are interested to hear my story about my encounter with an African witchdoctor, please ask me and I will tell you.

Are you zealous for the Lord? Are you preaching and declaring the Kingdom of God?