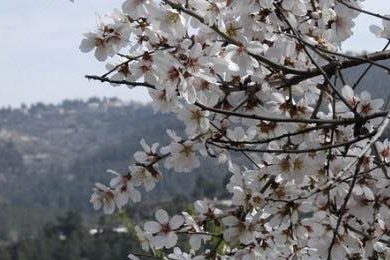 So hundreds of tents covered the mountain-side east of Bethel and I’m guessing that the city of Bethel (and the neighbouring city of Ai), were in constant communication with Abram regarding the resource situation.

Now I keep mentioning the name Bethel, because the scripture uses that name – which we know means ‘House of God’.

But in Abram’s time, WAS BETHEL CALLED BETHEL?

Well no actually. When Abram arrived with his family, servants and livestock it was called Luz.

It was only renamed Bethel 165 years later when Abram’s grandson Jacob came through the city.

Genesis 28:19 And he (Jacob) called the name of that place Bethel; but THE NAME OF THAT CITY HAD BEEN LUZ PREVIOUSLY.

Genesis 35:6 So Jacob came TO LUZ (THAT IS, BETHEL), which is in the land of Canaan, he and all the people who were with him.

Genesis 48:3 Then Jacob said to Joseph: “God Almighty appeared to me AT LUZ in the land of Canaan and blessed me,

Joshua 18:13 The border went over from there TOWARD LUZ, to the side OF LUZ (WHICH IS BETHEL) southward …..

Judges 1:23 So the house of Joseph sent men to spy out BETHEL. (THE NAME OF THE CITY WAS FORMERLY LUZ.)

So Bethel is Luz and Luz is Bethel. Or they were eventually twin cities.

What does Luz mean?
Luz simply means a nut-bearing tree, the almond. Or it could possibly mean bone. Or asylum.

It was a royal Canaanite city. The city of Luz. And when Abram wandered up from Shechem with his many family, it was Luz that he approached, and it was to the east of Luz and west of Ai that he pitched his community of hundreds of tents.

And the ancient royal Canaanite city of Luz, the almond tree city, which became Bethel in Jacob’s day, in the hills of Judea, is still today (el-Bireh, twin city of Ramallah) a very significant centre of political interest.

Do you know what month the almonds blossom in Israel?