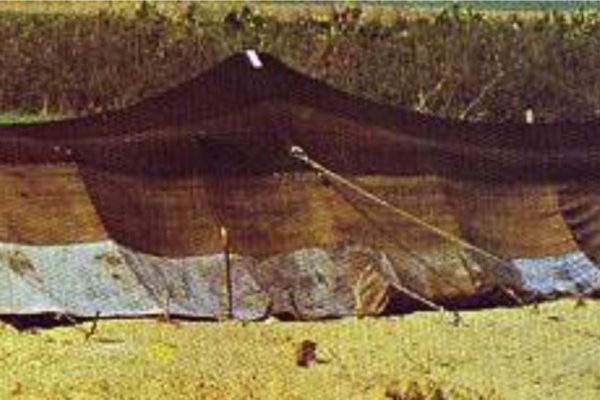 I want to talk about the tent (and camp) that Abram and his company travelled with so that we can appreciate what it looked like when Abram pitched his tent.
This is an adapted article written by Jeff E. Banner from The Ancient Hebrew Research Centre.

The tent of Abram’s day was divided into two parts.

Notice the similarity to the pictographic Hebrew letter “beyt”. ב
The word “beyt” is not only the name of a letter but is also a common Hebrew word meaning, “home”. בַּיִת
This letter is a representation of the floor plan of the tent, the “home” of the nomadic Hebrews.

The entrance to the tent is covered by a curtain which hung down from the top of the entrance.
The Hebrew word “dal” means “hang down” and is the root for the word “dalet” meaning “door”. דלת

This word is also the name of another Hebrew letter “dalet” ד – a representation of the tent door. The door of the tent is the most important part of the tent, not because of its appearance, but its function as the entrance into the tent.
Genesis 18:1 “Abraham was sitting at the entrance of the tent as the day grew hot”.

The door of the tent can be equated with the throne of a king.
In the Hebrew culture, the father of the family is the “king”, the one who holds full authority over the family.
The father will often sit at his door much like a king will sit on a throne.

All family legal matters were performed at the tent.
Here the father will watch over his household as well as watch for passing travellers. The nomadic rules of hospitality are very strict and complex.

Tents are constructed of black goat hair.
Song of Solomon 1:5 “Dark am I….dark like the tents of Kedar, like the tent curtains of Solomon.”
The hair is spun into strands which are then woven together forming panels approximately 2 feet wide and the length of the tent.

Over time, the panels begin to bleach from exposure to the sun and are periodically replaced.
Very little is discarded because so much work is invested in their materials including the tent. The pieces of the tent which are removed are recycled into walls or mats.

Another Hebrew letter derived from the tent itself is the letter “Hhet”, a word meaning “wall”.
This letter in the ancient pictographic script is, a picture of a wall.

The goat hair tent is unique in that it is perfectly suited for the desert regions of the Near East.

HEAT
A tent provided shade from the sun. During the strong heat of the day, the father would often sit at his door watching his family, livestock and the road for travellers
Genesis 18:1 Then the Lord appeared to him by the terebinth trees of Mamre, as he was sitting in the tent door in the heat of the day.
2 So he lifted his eyes and looked, and behold, three men were standing by him; and when he saw them, he ran from the tent door to meet them, and bowed himself to the ground,

The walls of the tent could be lifted to allow the breeze to pass through the tent.

COLD
The black tent absorbs heat keeping the tent warm. A fire is also built just inside the door for warmth.

RAIN
Like any other cloth, there is space between the hair fabric. Light coming through the black roof appear as stars in the night sky.
Isaiah 40:22 “He stretches out the heavens like a canopy, and spreads them out like a tent to live in”.
When the hair fibres get wet from the rains, the fibres expand, forming a watertight roof.

WIND
Strong ropes, secured by pegs driven into the ground, supported the poles which held up the tent.
Isaiah 22:23 “I will drive him like a peg into a firm place; he will be a seat of honour for the house of his father”.

The word “firm” in the previous passage is the Hebrew word “aman” and is often translated as “believe”.
The walls of the tent are laid on the top of the ropes allowing the wind to pass over the tent.

The Hebrew letter “vav” (or waw) – is a representation of the pegs used to secure the tent. The word “vav” is also a word in the Hebrew language meaning “peg”.

The Nomadic family consisted of the Beit (house, family), mishpechah (clan) and matteh (tribe).
The family, children, parents and grandparents, all resided in one tent.
The clan consisted of the extended family, grandparents, aunts, uncles, cousins, etc, all residing in one camp and may contain as many as 50 to 100 tents laid out in a circular pattern.
When the clan becomes too large for one area to support, the tribe splits into two clans (eg Genesis 13 when Abram and Lot separate).
All the clans (all being descended from one ancestor) may cover hundreds of square miles making up the tribe.
For example, “the house of Moses, of the clan of Levi, of the tribe of Israel”.

“Hhanan” is a Hebrew word often translated as “grace” but is understood as a “camp”.
The camp is a place of beauty, love, warmth and comfort.

So Abram ‘PITCHED HIS TENT’ on the mountain east of Bethel.

Does your own home reflect the sense of family of Abram’s ‘tent?
Are you a father who protects your family, your wife and children?
Do you lead your family in the direction of your home and in loving spiritual leadership?
Is the father honoured and respected in the home and community as in Abram’s day?
Is your extended family welcome?

Next time – where exactly is Bethel?