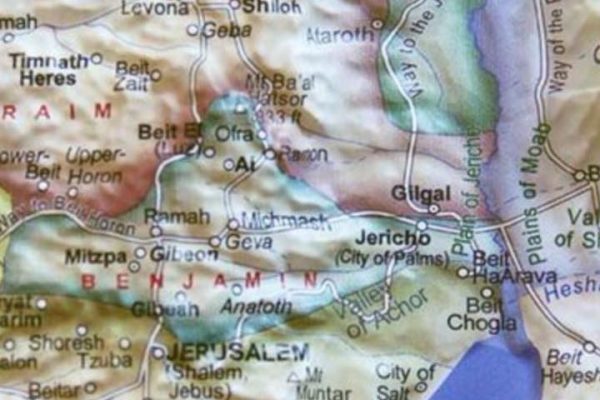 #29 Returning to the Land

It must have been a brilliant day as Moses stood with millions of Israelites on the banks of the Jordan River opposite where Jericho is.

Take a look at the map and picture and you will see that long before there was a Jerusalem, Moses was standing at the very place where if you look up the mountains in front of you, you would be looking up toward Jerusalem.

And you can see the date palm trees that are there even today, because they grow very well in this Jordan River region. In fact Jericho was called ‘The City of Palm Trees’ in the scripture.

This picture is from Google looking up towards Jericho and beyond are the mountain ridges on which Jerusalem sits.

Deuteronomy 34:1 Then Moses went up from the plains of Moab to Mount Nebo, to the top of Pisgah, which is across from Jericho. And the Lord showed him all the land of Gilead as far as Dan,
2 all Naphtali and the land of Ephraim and Manasseh, all the land of Judah as far as the Western Sea,
3 the South, and the plain of the Valley of Jericho, the city of palm trees, as far as Zoar.
4 Then the Lord said to him, “This is the land of which I swore to give Abraham, Isaac, and Jacob, saying, ‘I WILL GIVE IT TO YOUR DESCENDENTS.’ I have caused you to see it with your eyes, but you shall not cross over there.”

And at this place Joshua led the children of Israel across the Jordan River into the Promised Land on the 10th day of the first month (Aviv 10).

Then all the men were circumcised in the promised land (in a place they called Gilgal based on the act of circumcision that took place there), and then they celebrated the first Passover in the Promised Land for the first time as a nation on Aviv 14 – 40 years to the day after they left Egypt.

How could they possibly know that this was a very specific shadow of when Jesus (Yeshua) would cross the Jordan River at this very spot on this very day (Aviv 10), travel in to Jericho, healing a blind man as he entered the city of palms, having lunch with Zacchaeus the tax collector, healing a blind man on the way out of Jericho and walking up to Jerusalem and welcomed by the masses who threw palm branches under his colt and shouting the Messianic cry “Hosanna. Blessed is He who comes in the Name of the Lord.”

And then Jesus became THE Passover Lamb on Aviv 14 and entombed, rising from the grave on Aviv 16 to become the first fruit – the first of many brethren.

The children of Israel, the descendants of Abram are returning into THE LAND promised to them. What a day!